Started off on a Sporty 28 years ago, I think that makes that motor a vintage Evolution. Crazy huh? Back then the Evolution Sporty was only 1 year old and had just taken over from the Iron head sporty. 1986 the first Sporty Evo's appear and 1985 for the first big twin Evo's..
I had gone to Harley School to become a tech and I know it was a long time ago because we worked on Panheads, Iron Sporties, the 66-69' Pan-Shovel and the Shovelhead. There wasn't one Evo in class yet lol.
You know your old when you know what points are or a Magneto (no not an X-men) is or if ya ever hand tuned your linkert or S&S carb before.
Anyway, I finally gave in to comfort and got me a 2006 FLHRCI you see here, brand new which I just paid off actually. She's my main squeeze now. Our biggest ride together so far was the 1100 miles from Phoenix, AZ to Euless, TX and boy was that an adventure, she and I both got battle scars from that one. It's not bad enough that illegal aliens do not respect the immigration laws but they also do not hold driving laws in high regard as well. Me and "baby" got rear-ended on the way to TX. Almost killed me, and she got a banged up skirt.But I hung onto her and she never fell over, the cop and fire fighters right there when it happened couldn't believe it. Anyway enough of my adventures.
Thanks to Sierra Vista H-D for patching me up and getting me on the road so quick so I could get home and to Adam's H-D in TX for patching up baby to better than new condition. And to Bedford Back & Neck for kinda patching me up.
I still have a soft spot for that first Sporty though and still own it as well and that's why this page exists. Call it a second chance on life for an old EVO engine. She deserves it.

Well the project is stalled for a bit due to cash reserve so I'll post any bike events I happen upon in the meantime and it just so happens that every Saturday the Month of March the good folks @ Adam's Harley-Davidson Texas were giving their customers (me) a 1-5000 chance at winning a Softail for FREE and since Texas has some kinda law called the blue law or something like that, you can actually go there and not be swarmed by sales people (They can't sell bikes but they can give one away). There was free grub, coffee and lots of bikes to look at and ogle.

They also had a wrench out on the floor tearing down and reconstructing a Softail for those of us grease knuckles that get off on that sort of thing ( It's like strippers but no pole). He would answer questions about assembly and dis-assembly as he went along and even put up with me snapping pictures.

Saw the new CVO Road King a cool salesman there (I could point him out but I forgot his name, the curse of old age and senility) let me sit my old scraggly ass on the CVO and although I was told to control my excessive drooling I was even allowed to start the bike in the showroom. We didn't talk sales just cool stuff like what's this, and this, and this, and this, and this, and this, .......you get the picture?
If I hadn't just paid off my 2006 FLHRCI (Only 10k miles on er too, saving them for m' retirement).


This is a fine example of Panhead right at the door of the dealership.
I fell in love right there.

The small video was an accident I am still an amateur pho-tog but will get better as time goes on. 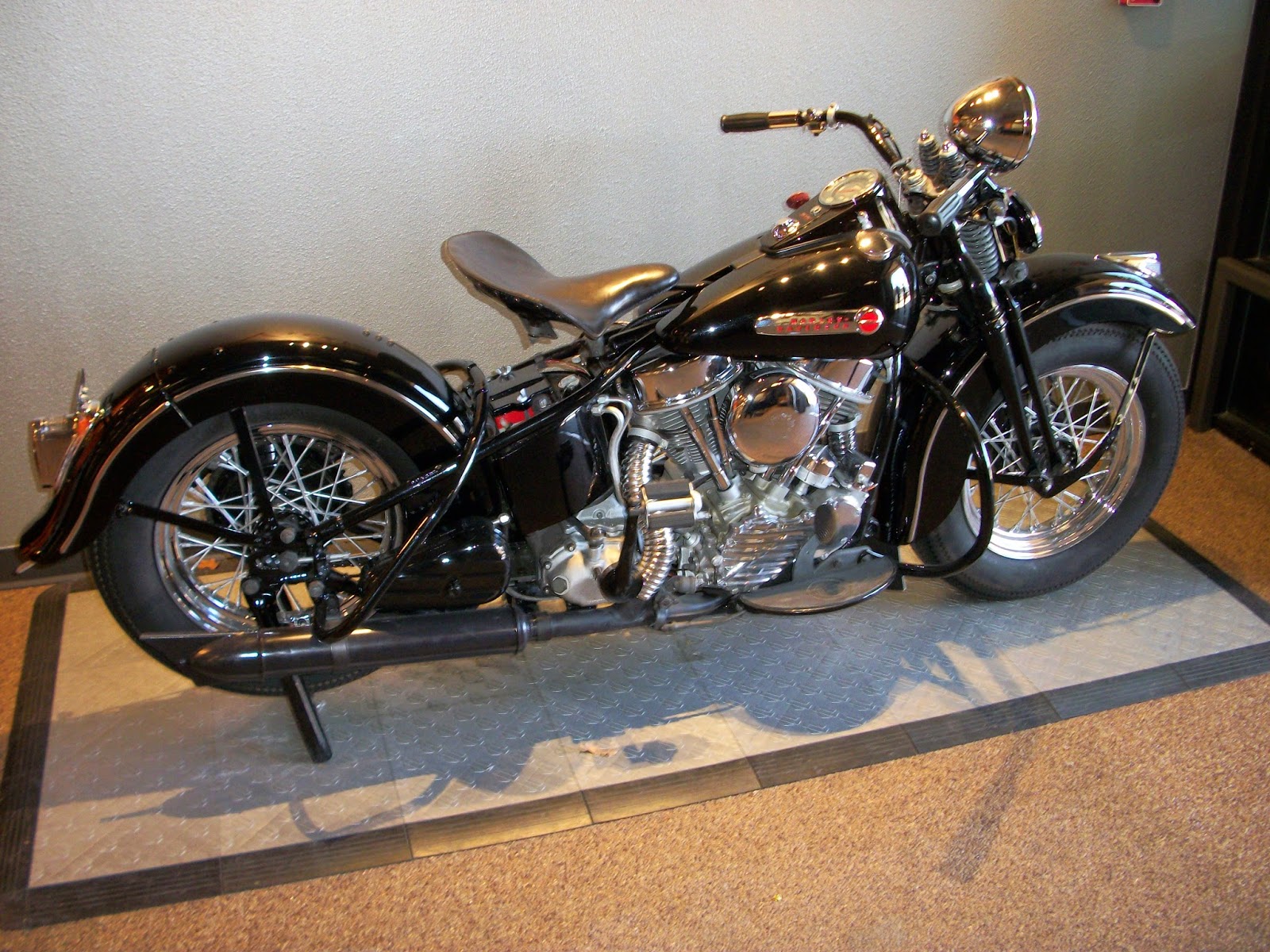 Here's the Pan-Head again for those that like a lasting pix. Note this is photo is copyright 2014 A.W. Buchen Event chronicle, 1st amendment right.

Talk about sexy. Look at that engine! I coulda stood there all day lookin at my reflection in it *twirls beard between fingers*.  I keep hoping that Harley will do what other reappearing Motorcycle manufacturers are doing and that is, reconstructing their old classics with the new technology incorporated. Could you imagine a brand new 1947 Knucklehead with fuel injection? Improved oiling system etc? Boggles the mind. 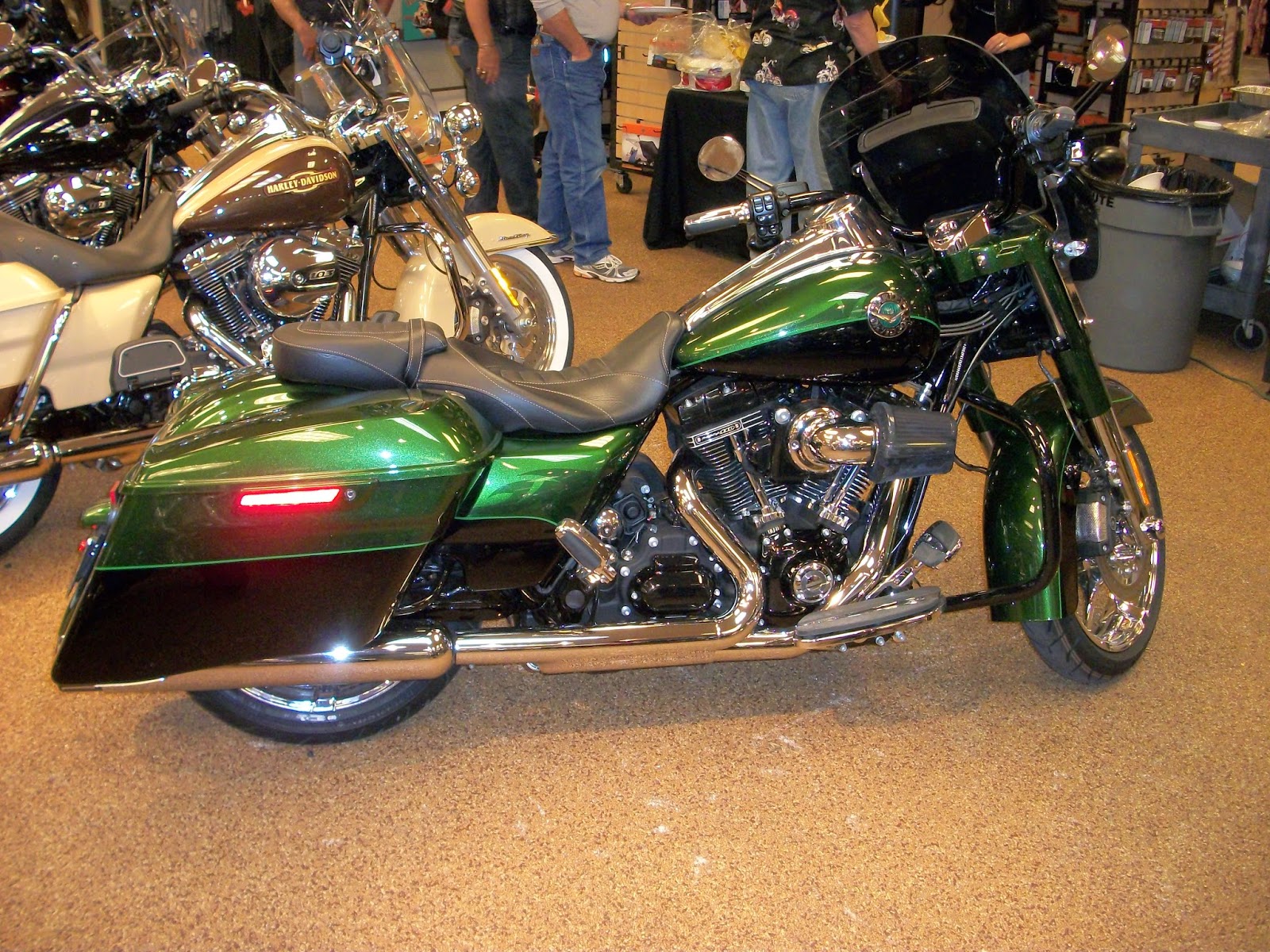 Here's the CVO (it's mine don't anyone buy it OK?, naw just kiddin) She is a  beaut though huh? Nice bike has all this one touch stuff, I guess they asked today's liberal weekender what appealed to them most and touching the bike just once was the answer, go figure? I'd rub myself all over that. HAHAR. Also I gotta admit the flaky green looks awesome on the showroom floor but I'm still OLD SCHOOL and green is a old school bikers unlucky color. Now flat black? OOOOOO Baaaaby. 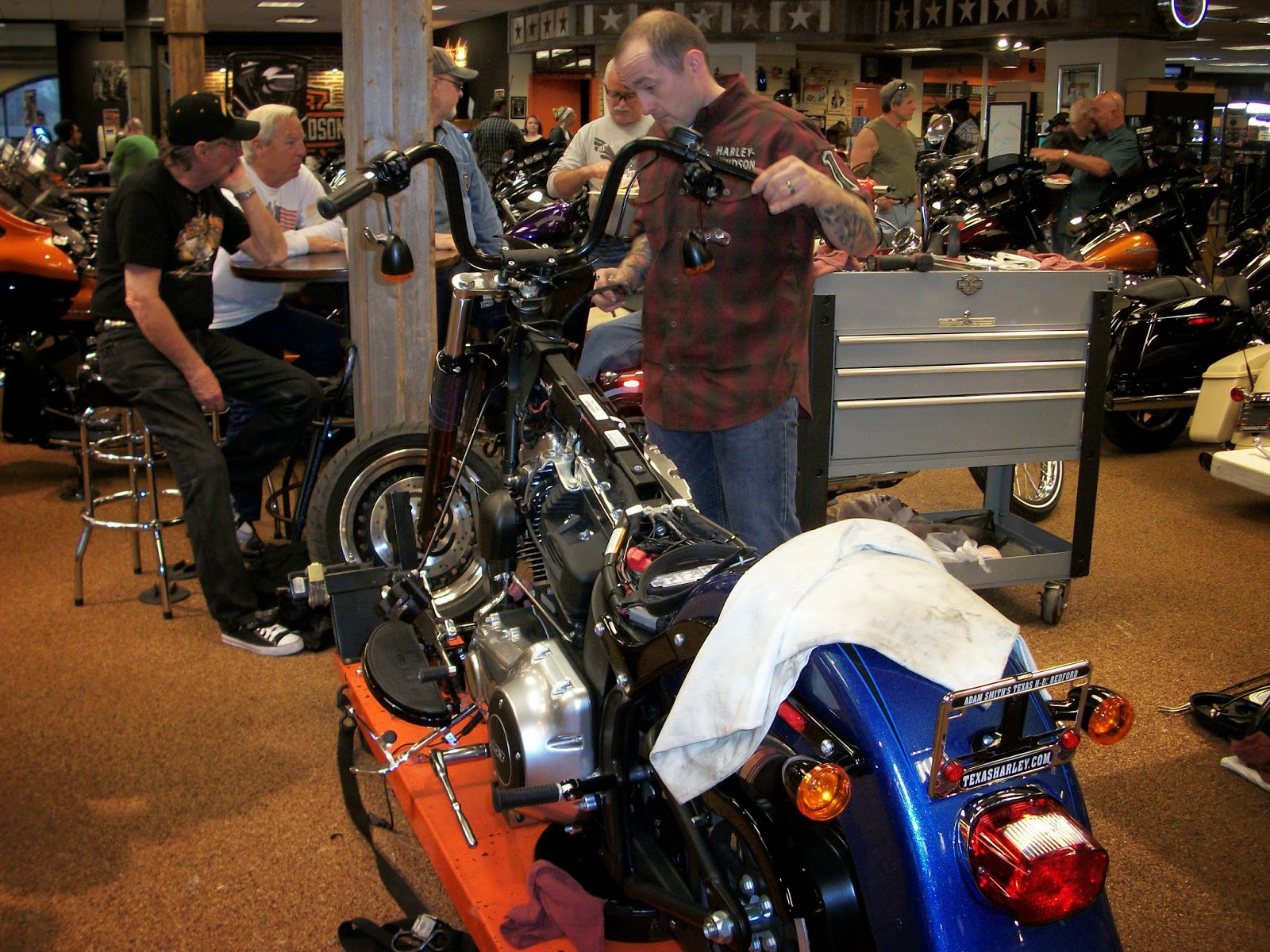 The Wrench, wrenchin' in the middle of the showroom floor. Note this is photo is copyright 2014 A.W. Buchen Event chronicle, 1st amendment right.

Good place for us old grease monkeys to hang around. Especially since when I went to the H-D Factory endorsed school to become a tech we learned how to make a 200k shovel-head. 110 C.I. motors cost a bundle and weren't to be found everywhere. Back then the 1340 cc/ 80 C.I.  Evo was still the new kid on the block. I can't believe my 87' 1200 S&S Sporty engine is almost 30 years old, that's vintage dude. I mean I had a bro (Byron Croakman) back in the day who rode a 38' ULH 80 C. I. Flathead. Now we considered that vintage. lol. Ah well everything ages and 30 years from now that CVO will be vintage as well. So watch-in this wrench work on the new Dual cam F.I. Engines was educational to me. 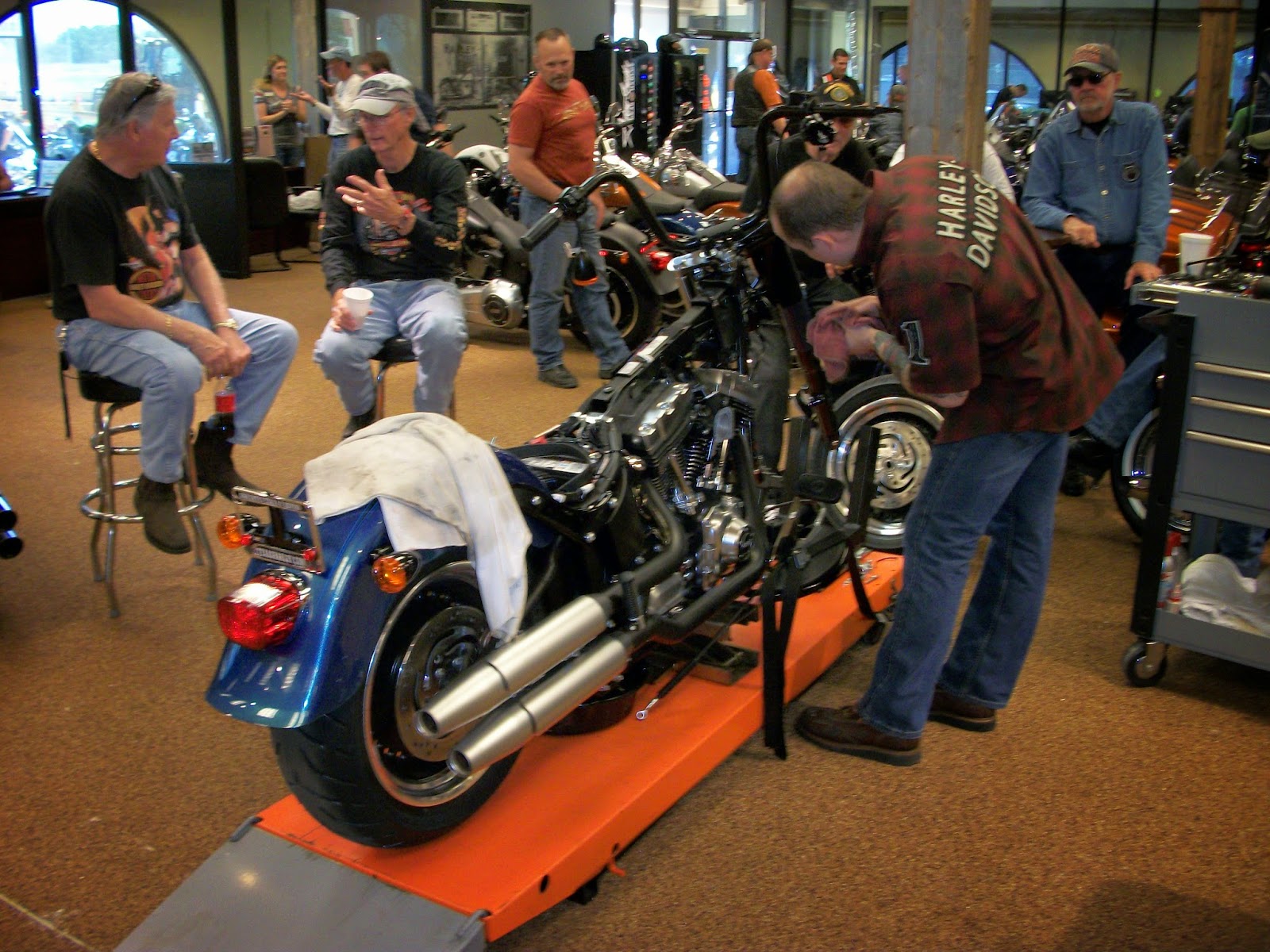 Another shot of the wrench, wrenchin. Oh labor of love.....I bet ya half the time he didn't even know we were there? I know I get so engrossed working on my bikes when I am that time just slips by. Note this is photo is copyright 2014 A.W. Buchen Event chronicle, 1st amendment right. 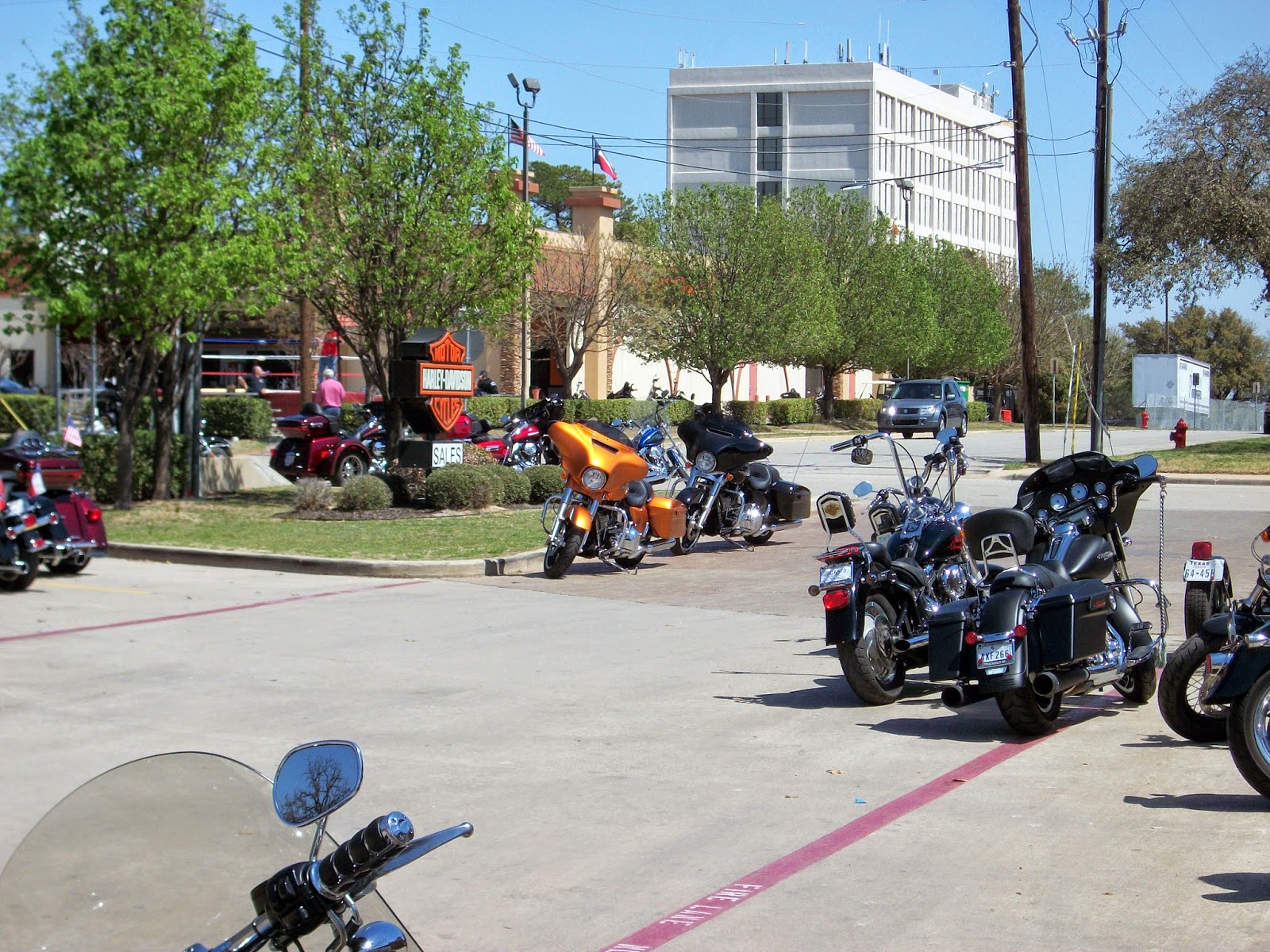 From the Dealership showroom you look out across the intersection to the Shop ( yeah this place is in two huge buildings) Will soon move to their new location under one massive multi-floor home close by. Note this is photo is copyright 2014 A.W. Buchen Event chronicle, 1st amendment right.

Lot's of scoots in the Parking lot. Everyone's here to see if they won my....err the H-D Adam's Harley-Davidson was giving away every Saturday in March. Was a beautiful day today in the Dallas area. Was supposed to get in the 80's today, feels like it's in a comfortable high 70' range right now. Yesterday Adam's had a bikini Bike wash :( I missed it cause it looked like thunderstorms (which did not hit). So I stayed home. When ya get to be an old gray beard like me even the slightest rain makes the bones come alive and not in a good way either. I'll make sure to make the next Bike wash though and take some pix for ya's. 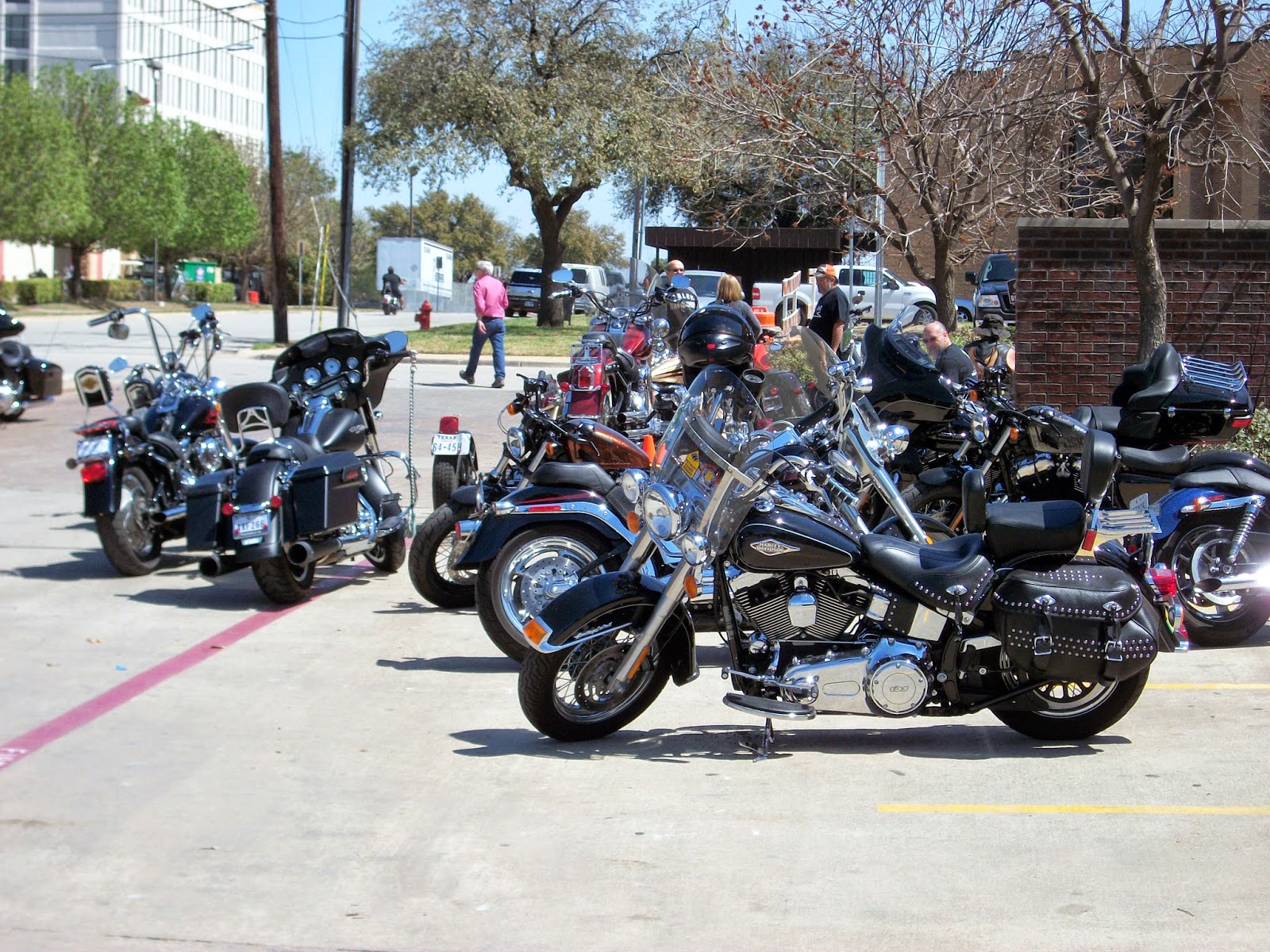 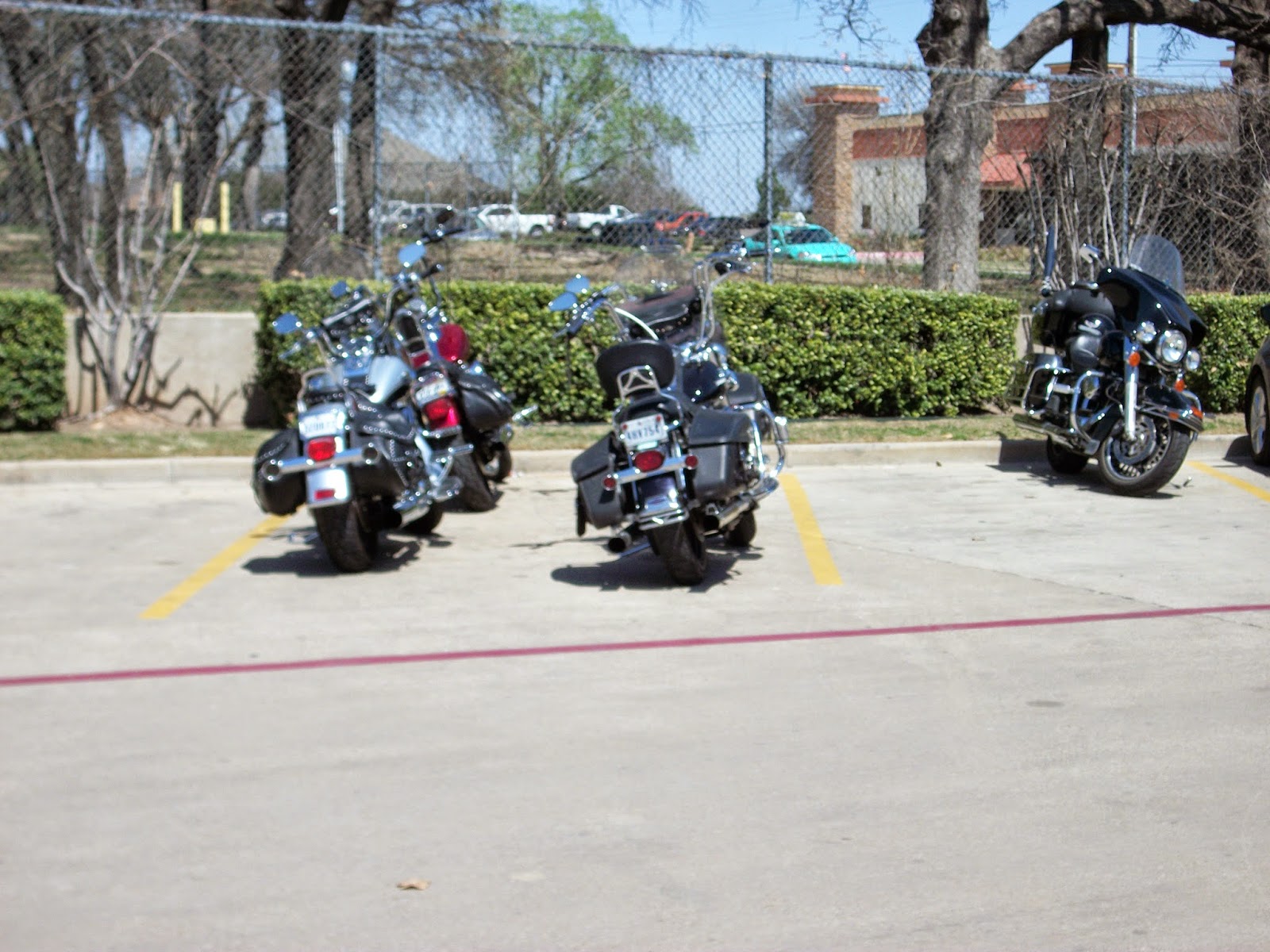 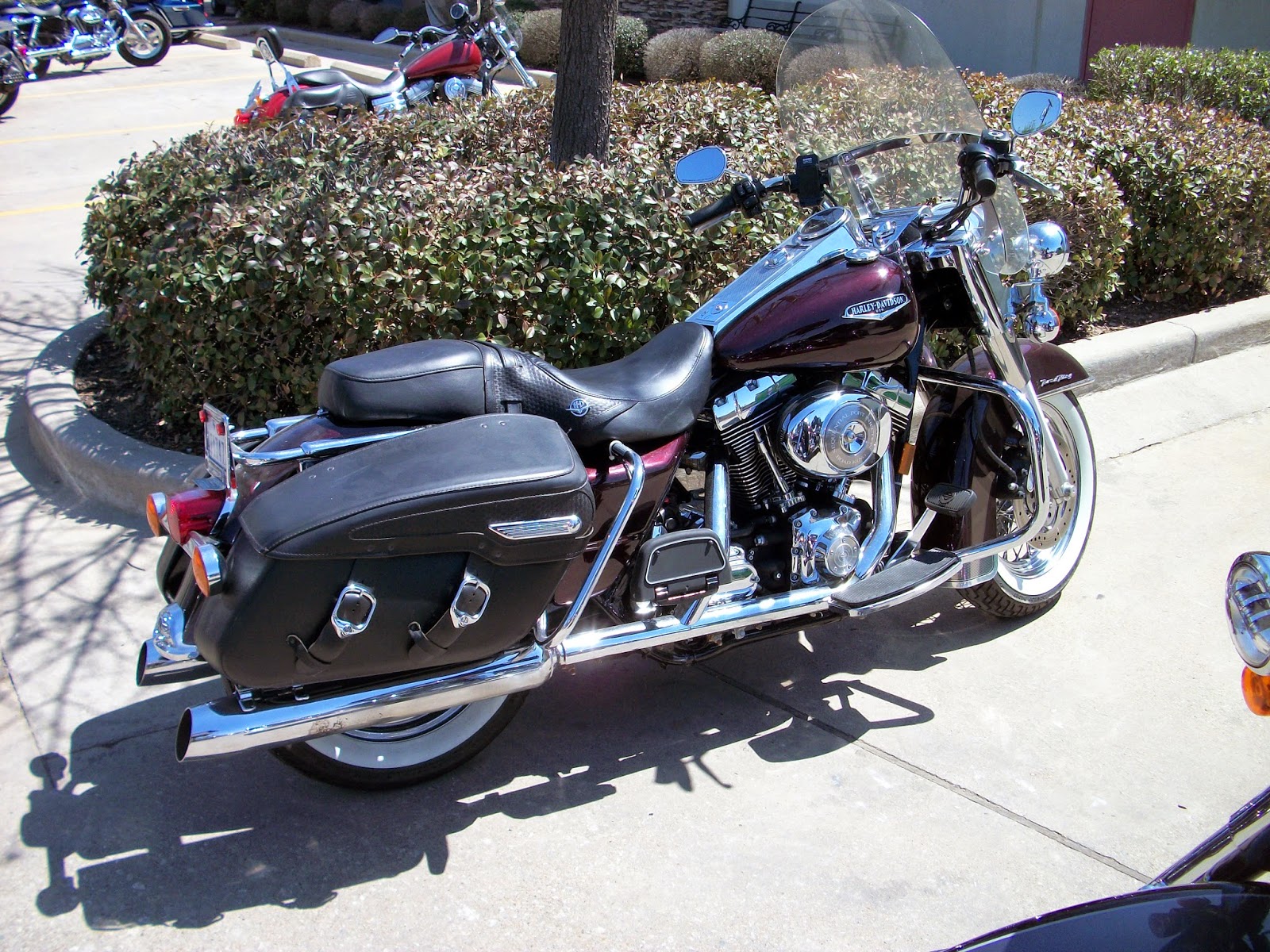 There's my sexy baby.  2006 FLHRCI with 10k miles. You know if I whistle, she comes to me. Note this is photo is copyright 2014 A.W. Buchen Event chronicle, 1st amendment right.

Well there's my little girl. Got me here from AZ, 1100 of those 10k miles. Even though she got smacked in the butt by a Mexican chick who likes gabbing and texting rather than driving with her eyes on the road. She got fixed up better than ever though and runs like a fine swiss watch.

I did some drooling in the parts department while I was here as well. Drooled on some Vance and Hines, Rinehart, Screamin Eagle. They offer a nice performance package for my baby that I think I'm gonna hook up with.

Anyhow, Thanks for taggin' along. I'll get back to Project Bobber as soon as the coin starts flowing again but I will do what I can that is free up till then. Keep the rubber side down until later *cheers*.

Note/Disclaimer: Photo's removed without permission from this site is subject to legal action. All photographic material included was taken by myself, is original and does not infringe on anyone else's copyrights but is protected as copyrighted material for my own use. The pictures herein depict a public event or function for which I exercise my first amendment right in reproducing for blog readerships enjoyment. No commercial gain is obtained from the photo's. A.W. Buchen is no way affiliated with Adam's Harley-Davidson Texas.
Posted by The Blogger Project at 5:23 PM

Help the bob to be born

Andrew Buchen/Bobber Project is not associated with any Authorized H-D Dealership or other custom bike shop. All photo's included in this blog are of original creation by Andrew Buchen and taken in accordance to the 1st Amendment and Freedom of Speech. All materials photographed are public domain except the photographs themselves which are Copyright 2014 A.W. Buchen. Any function, event, concert, ride or function displayed on this blog is purely for entertainment purposes. Bobber Project is the property of A.W. Buchen. This site contains adult material and language and is rated 18 or older. Any suggestions, complaints or praises may be sent to awbretire@gmail.com. Rusty Wrench Inc, is the copyrighted property of Andrew W. Buchen, www.thebobberproject.com is owned and copyrighted by Andrew W. Buchen/Rusty Wrench Inc. All materials copyrighted 2015.