Started off on a Sporty 28 years ago, I think that makes that motor a vintage Evolution. Crazy huh? Back then the Evolution Sporty was only 1 year old and had just taken over from the Iron head sporty. 1986 the first Sporty Evo's appear and 1985 for the first big twin Evo's..
I had gone to Harley School to become a tech and I know it was a long time ago because we worked on Panheads, Iron Sporties, the 66-69' Pan-Shovel and the Shovelhead. There wasn't one Evo in class yet lol.
You know your old when you know what points are or a Magneto (no not an X-men) is or if ya ever hand tuned your linkert or S&S carb before.
Anyway, I finally gave in to comfort and got me a 2006 FLHRCI you see here, brand new which I just paid off actually. She's my main squeeze now. Our biggest ride together so far was the 1100 miles from Phoenix, AZ to Euless, TX and boy was that an adventure, she and I both got battle scars from that one. It's not bad enough that illegal aliens do not respect the immigration laws but they also do not hold driving laws in high regard as well. Me and "baby" got rear-ended on the way to TX. Almost killed me, and she got a banged up skirt.But I hung onto her and she never fell over, the cop and fire fighters right there when it happened couldn't believe it. Anyway enough of my adventures.
Thanks to Sierra Vista H-D for patching me up and getting me on the road so quick so I could get home and to Adam's H-D in TX for patching up baby to better than new condition. And to Bedford Back & Neck for kinda patching me up.
I still have a soft spot for that first Sporty though and still own it as well and that's why this page exists. Call it a second chance on life for an old EVO engine. She deserves it.

Hey folks!  I was scroungin around on the net lookin for some ideas for the bobber (better to do searches and see if someone else tried an idea I had already rather than me doing it from scratch), turns out someone has tried this already and its a pretty slick setup however, I would change a few things just because.


Ain't it cool? Your lookin and thinking WTF has he been drinkin? I'm sober and your looking at a dual FL type exhaust set-up for a Sporty.

I'm thinking this set-up would be kick-ass on the Bobber don't you?  I mean of course I'd put my own stamp on the whole thing but I'd fab it pretty much the same way, since its been done no need for me to scratch my head about it right?

I would be presented with slightly different set of issues than this dude had though. I'd have to fit em to the rigid frame set-up. Also, I'm thinking old style fish tails or just straight shootin, no baffles, drag pipes.

I'm already going to hook up the FLHRCI with the Cobra Fi2000 active tuner and might do the same for the sporty with a similar tuner for non-EFI. This tuner is the cat's ass, it works real time as you ride based on your power band and driving habits and takes into account all types of accessories available. No more guessing or hunting for tune maps.

Anyhow, the tuner will dial up the right performance for the Bobber with what-ever pipes, air cleaner, carb and Engine build I decide to do be it a big bore or 110" S&S Stroker engine it will smooth it out while I ride the beast.

These pipes are pretty simplistic set-up and I can probably get away using most of a stock head pipe set of drags as the base for them. I don't want the stock factory Sporty cross over. 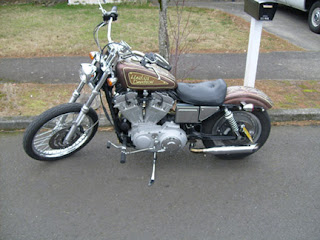 This is the left side of the bike on a swing arm set-up and ya can see it comes across just behind the primary.

Should be pretty similar for a rigid frame as well. Actually on a rigid I'll gain room back there with a round oil bag and relocated battery box.

I could use those new  pipe building kits instead of bending my own, we'll see I may think that will look too rough or maybe not. Then I'll just get the works triple plated after I get done tweaking and grinding the whole set-up to make it nice.

I could pop a pair of them old style Flathead pipes on  the bike and rework those to fit. I think they are available as aftermarket. 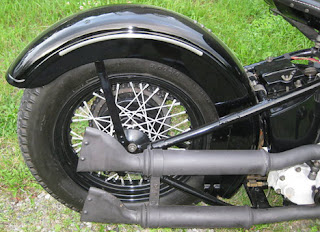 The important thing is to make sure they are solid, the instal may need rubber grommets for vibration isolation. Brackets will need to be sturdy and properly isolated. And I'll have to make sure that both pipes are parallel to each other on both sides of the bike. And most importantly, make sure all clearances are observed and accurate so nothing rubs around the bike.

Here's a pic of the dude right side config. This is the only thing I don't like about this guys set up, the cross over is ugly. IMO. 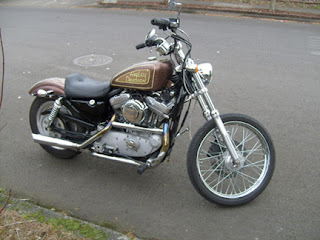 Well there we have it lemme know what y'all think and toss me any ideas which I can ignore as usual, err I mean take into consideration.

Keep the rubber side down.

Help the bob to be born

Andrew Buchen/Bobber Project is not associated with any Authorized H-D Dealership or other custom bike shop. All photo's included in this blog are of original creation by Andrew Buchen and taken in accordance to the 1st Amendment and Freedom of Speech. All materials photographed are public domain except the photographs themselves which are Copyright 2014 A.W. Buchen. Any function, event, concert, ride or function displayed on this blog is purely for entertainment purposes. Bobber Project is the property of A.W. Buchen. This site contains adult material and language and is rated 18 or older. Any suggestions, complaints or praises may be sent to awbretire@gmail.com. Rusty Wrench Inc, is the copyrighted property of Andrew W. Buchen, www.thebobberproject.com is owned and copyrighted by Andrew W. Buchen/Rusty Wrench Inc. All materials copyrighted 2015.